Above is part of Kanye’s heated rant on his Yeezus tour in Las Vegas, saying a variety of things that are, well, a bit insane. On the good side of things, Kanye says “f*ck racism… high class, low class kiss my ass,” referencing the recent controversy at Barney’s, which Jay-Z defended himself against since he collaborated with the luxury retail store to benefit his charity, The Sean Carter Foundation.

On the other hand, Kanye suggests some hippie principles, saying, “We are one… we have enough resources to build a utopia, but we’re distracted by dumb sh*t like the New World Order,” which is all well and good.

He says that world leaders are trying to distract people from the truth that people are “constantly being lied to.” After, he starts singing “Runaway” to the delight of the crowd.

He also mentions that he can crash the worldwide web “whenever he feels like it.”

Somewhat typical Kanye ranting, but certainly a very angry and particularly wacky performance. Below is the first part of his rant: 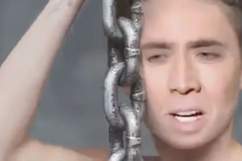