Kanye West and Jimmy Kimmel come together on Jimmy Kimmel Live to address the feud the two had over Twitter not too long ago. In case you forgot about the feud, check it all out in the two below links: 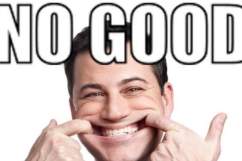 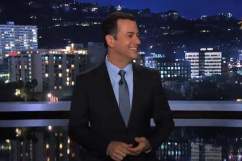 Kanye comes onto the set with a big smile and the two give each other a very friendly greeting. Jimmy actually starts off by saying he wanted to clear things up because he felt bad about their feud. Kimmel also went on to say that their fight was not a publicity stunt. Kanye further confirms that saying anything he’s ever done has not a publicity stunt and that he’s just done what he’s wanted to regardless of what the press has wanted.

The two stars then talk about the phone call they had about their argument and how badly it went. Kanye admitted that they took it back to high school on an immature level. As a result, Jimmy makes a joke that he got beat up a lot in high school.

Jimmy begins to talk to Kanye saying that a lot of people think he’s a jerk, but he always defends him. Jimmy then pulls up a photo of Kanye and Jimmy’s dad and says a lot of kind words about Kanye. In keeping things real though, last week Jimmy used that photo as a joke against Kanye.

West actually then says that he’s “totally weird, totally honest, and totally a genius.” He then reveals that his girlfriend Kim Kardashian was denied a star on the Walk of Fame because she’s a reality star and he thinks it’s ridiculous because she completely deserves one.

After some commercial breaks, Josh Groban has a little fun and sings a bunch of tweets written by Kanye West. It’s pretty hilarious and Kanye seemed to enjoy it, admitting to Jimmy Kimmel that it was pretty funny. Watch the video below.

Speaking of funny, when Jimmy brings up the Twit pic that Kanye put out, comparing Jimmy to Spongebob, Kanye says Spongebob was the first thing to come to mind when he thought of him. Then, Kanye confesses he started to think it was really hilarious.

About halfway through the episode, Jimmy presents Kanye West with a gift for baby North … leather jogging pants for babies.

Later on in the interview, Kanye West goes on a rant about the paparazzi and how disrespectful they are. He then warns all the photographers out there saying:

Don’t think for one second that I’m not from Chicago.

So, Ladies and Gentlemen, the feud is officially over.