Kim Kardashian and Kanye West are engaged! West popped the question last night. It was a birthday surprise for Kim Kardashian as baby daddy West proposed on her 33rd birthday in front of family and friends.

Just look how happy Kim and Kanye look. I cannot express how happy I am for thempic.twitter.com/ktYvwHeB5T

E! News reported all the details:

Before popping the question at San Francisco’s AT&T Park, which he rented out for the occasion, he asked future mother-in-law Kris Jenner for her daughter’s hand in marriage. That part obviously went well. Having secured the go-ahead from the Keeping Up With the Kardashians matriarch, he got down on one knee and proposed to Kim with a flawless 15-carat diamond ring by celebrity jeweler Lorraine Schwartz. Aiding in his effort was the field’s jumbo screen, which flashed the sign, “PLEEEASE MARRY MEEE!!!” A 50-piece orchestra played Lana Del Rey’s “Young and Beautiful,” followed by Keri Hilson, Ne-Yo and Kanye’s “Knock You Down.”

There has been a lot of speculation that the star couple was not going to walk down the aisle any time soon. Actually, it wasn’t long ago that it was reported that Kanye allegedly asked Kim for her hand in marriage and she declined. 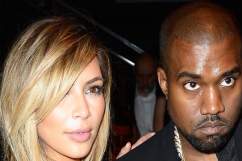 Kanye West Proposed to Kim Kardashian and She Said No?

My absolute favorite part of Kanye's proposal to Kim is the words he specifically chose to display on the JumboTron. pic.twitter.com/HBTkOKMDWe

Family and friends are overwhelmed in happiness for Kim and Kanye.