Glee will pay tribute to Cory Monteith tomorrow in a “Farewell to Finn” episode titled “The Quarterback.” In an exclusive interview with TV Week, Lea Michele finally opens up about losing boyfriend Cory Monteith as well as co-star Finn Hudson, calling the tribute episode “perfect.”

Not only is the cast very emotional about the “farewell” episode, they have not seen it. Lea Michele states:

I haven’t seen it yet, but we did it because it was something we all needed to do together.

I feel like, for me personally, I’ve lost two people: Cory and Finn.

In terms of the cast and crew remembering Cory, Lea Michele spoke about the service they had for him and why it felt right to do the same for his character on the show.

We had a beautiful memorial for Cory in the auditorium and some of the cast members sang and people spoke about him. It only felt right that we would do the same thing for Finn, so I felt it was very therapeutic.

And, when Lea Michele was asked if working on the show is difficult for her, she responded with:

Everyone is asking: ‘Is it hard to do this? Is it hard to be back at work?’, but the truth is it’s no harder at work than it is in life so we might as well all be together as a family supporting each other to get through this together.

Clearly, it’s been a long road for the cast, especially Lea Michele. If you didn’t get to see her sweet words about Monteith at the Teen Choice Awards, click the link below: 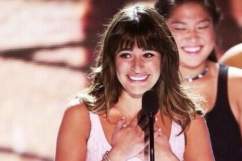 As far as what Lea Michele wants people to remember about Cory, TV Week reads:

I really woke up every single day feeling like I was being in some sort of spell or something, that I was lucky enough to have him in my life. I feel like what happened with Cory (the cause of his death) was this big, (holding her fingers together to reflect a miniscule amount) in the scheme of who he was and his life … There was no greater man than Cory, so for the time we spent together I consider myself very lucky.

Now, let’s talk about the tribute episode itself. It’s called “The Quarterback” and takes place a few weeks after Finn’s funeral, but it’s rumored that Finn’s death is never explained on the show. I guess we will have to see since many have speculated that Finn would pass away from drugs just like Cory had. Naya Rivera (Santana) sings “If I Die Young”, Chord Overstreet (Sam) and Kevin McHale (Artie) sing “Fire And Rain”, Mark Salling (Puck) performs “No Surrender”, and Rachel Berry, played by Lea, sings Bob Dylan’s “Make You Feel My Love.” 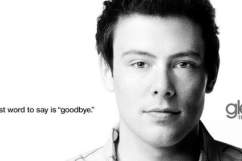