Actress Mia Farrow has sensationally told Vanity Fair in an interview that her activist son, Ronan, may have been fathered by the Chairman of the Board.

It had previously been thought that Ronan Farrow, 25, was the only biological child of Mia Farrow’s ill-fated marriage to Woody Allen.

When asked by the magazine about Ronan’s paternity, and whether or not Frank Sinatra may be his father, she says: “Possibly.” The Guardian reports that a DNA test has not been conducted.

Frank Sinatra and Mia Farrow were married for two years from 1966-68, it had been rumored that the pair carried on their relationship occasionally, even after Farrow began a serious relationship with Woody Allen. Farrow and Allen’s relationship ended infamously in 1992 when it became public that Allen had been carrying on an affair with one of Farrow’s adopted daughters, Soon-Yi Previn. 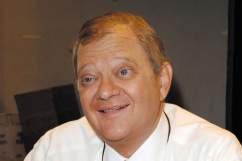 Ronan Farrow was born in 1987, which would have made Sinatra 71 years young at the time of the boy’s conception. Awesome.

Could he be Sinatra’s boy? You be the judge: