Before introducing Miley to her set, Ellen DeGeneres shows a clip from Miley: The Movement and then says she has her own provocative documentary in the works. She then shows everyone a trailer of her film titled Ellen: She Also Has a Movement. It’s pretty hilarious. Check it out in the below link. 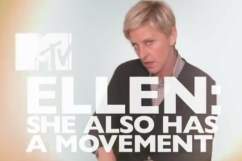 In the interview with Ellen, Miley talks about the infamous VMA performance and says it was supposed to be funny. She also says she can’t really understand where the shock comes from. Ellen then talks about how Elton John defended Miley on her show. Then Miley starts talking about how scared she gets when Winter comes around because she gets anxiety from wearing clothes.

Then, the tongue has been brought up. First, Miley says that her mother actually hates when she sticks out her tongue, but she says she feels more comfortable in photos when she does it. She gets nervous about smiling for pictures or on the red carpet, so it’s more of a nervous habit.

Later on, Miley talks about her breakup with Liam Hemsworth and says that she’s happy people have focused more on her music right now, which has helped her get through. When asked if she still speaks with him, she says she has been too busy and she’d like to close that chapter. She further talks about her moving on saying she’s the happiest she’s ever been.

When Ellen talks to Miley about her skydiving, she distracts her while a man dressed like Robin Thicke, wearing a foam finger, sneaks up behind her and scares the crap out of her. Check it out in the below video:

Towards the end of the show, Ellen presents Miley with a couple gifts. One is a bobble statue of Miley and the bobble part is actually the butt. The other gift was a white, completely see-through mesh onesie.

As for Miley’s performances, she of course performs her two hits “We Can’t Stop” and “Wrecking Ball.” 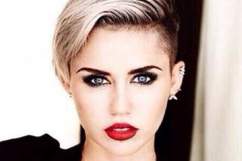 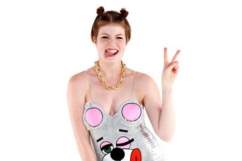 Where to Get Miley’s Foam Finger Costume: Hottest Halloween Accessory Ever!