Surprise!!!!! Paul McCartney’s performing a free concert in Times Square and it started at 1 p.m. today!

Come on down to Times Square… It's all going to be happening there!

For a better look, check out the craziness by clicking here. You can also check out some of the Vine videos people posted below:

Greatest city in the world! A Paul McCartney concert in the middle of Time Square on a Thursday… Just cau… https://t.co/jzGj3a8Z3J 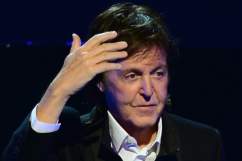