It’s the 10th anniversary of the original premiere of Queer Eye For The Straight Guy. It’s actually the first time in 7 years that the cast of the controversial makeover show has gotten together on TV … The guys got together with host Andy Cohen on Bravo to talk behind-the-scenes, favorite scenes, and old jokes at Ted Allen’s expense. Now let’s reintroduce the Fab 5 below:

WOW. @KyanDouglas is even hotter than he was 10 yrs ago. Like fine wine. Woof! Loved #QueerEye so much #bravo

The first big topic of the reunion show was about how the title was very controversial at the time, and Ted Allen actually tried to get the producers to change the title. Allen’s mother called it “Q E” and Jai’s mother called it a makeover show. Carson actually hadn’t come out to his family prior to the show, though they should have had some sort of clue. Ted Allen had a similar situation occur with his family.

The video clips begun with the “house of horrors.” All the messiest and most disgusting moments are shown from some of the guys’ homes. It ends up looking like an episode of Hoarders. They said the grossest was an apartment in Williamsburg, owned by a comedian. Carson and Thom actually needed inhalers.

Queer eye for the straight guy reunion… YES! Wish their show was still on Bravo. Hey @andy bring it back!

Next, the Fab 5 revisit all the worst groomed men. The guys then confess that they still find it hard when they’re in other people’s homes because they were so used to going through people’s drawers on the show. Then they reveal that Kyan was the biggest diva, but they loved him for it. Kyan then admitted that he had a scary time with fame and it took a while to adjust for him.

A really cool moment was touching base with “the bald guy” from the Fab 5’s favorite episode where they encouraged a family man to get rid of his beloved hairpiece. After a video clip from “the bald guy,” Ted Allen mentions that all the men’s ponytails they chopped off in their show episodes were donated to Locks of Love.

"I like to call it 'nude' because it sounds more elegant." #QueerEye

The best flashback was when Carson got naked and ran around one of the houses in a “nudist episode.” Then the guys locked him out of the house … still laughing. After this moment of naked reflection, it’s revealed that Thom was the biggest prankster out of all the guys and he was also the worst driver.

And, the moment we were all waiting for … Andy Cohen asks the guys if they would ever consider bringing back the show … Jai would love to do the show again. Kyan says he would be curious to see what would happen. Ted Allen first jokes that he would never do it again, but then says he misses throwing sofas out of windows. Thom agrees to only do the show again if he can still duct tape cast member Jai to a chair. Carson is on-board that the five of them just have an amazing chemistry together. So, cross your fingers … The 5 of them end with toast to a great reunion!

Well, if you remember anything about the Fab 5, you know they were famous for their one-liners. With that said, enjoy some of the best quotes from the reunion show:

Put your foot in this, Cinderfella. – Carson Kressley

The funny thing about being semi-famous is it makes everything sort of okay. -Ted Allen

I used to have hair just like yours … but I also used to be named Louise and live in Germany. – Carson Kressley

I heard he’s hung like a bee. – Carson Kressley

And now you can check out an old clip from the show when it was on the air: 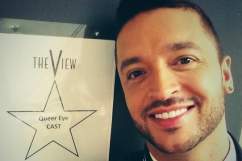 ‘Queer Eye For the Straight Guy’ Reunion on ‘The View’