With the reunion of Queer Eye For the Straight Guy set to air this coming Sunday, October 20, 2013 at 9 p.m. on Bravo, the five guys we love are gearing up for the press. As a special treat, we had a sneak peek at what to expect when Carson, Thom, Jai, Ted, and Kyan stopped by The View this morning.

Queer Eye Reunion on The View…YES!!!

So, what have these guys been up to? Thom Filicia has his design company in NYC and people still ask Thom for advice because of the show. Kyan is and has been on the Rachel Ray show for seven years, amongst other things. Jai Rodriguez is on the acting train right now and was a series regular on Malibu Country. With all the Malibu Country mention on the Real Housewives of Orange County, that’s bound to come up on Bravo’s reunion show. Ted Allen we’ve seen on shows like Chopped, Iron Chef America, and Top Chef. 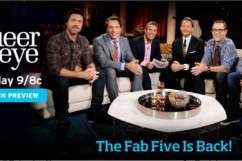 Now let’s talk about some of the juicy details … Apparently, because of the show, some of them had to come out to loved ones. Carson was one of them. Ted Allen’s parents actually thought the show was a terrible idea until it aired and then they were in full support. As far as the title of the show, back then, many of them thought the title was provocative and were hesitant to tell people like their parents the name of it. One really awesome question asked to the Fab Five was about the weirdest things they’ve ever found in guys’ houses. According to Jai, the strangest items found in a home were adult toys. Carson then chimes in that they also found marijuana. Carson jokes, “These have got to go … in my car.”