Who’s ready for Part 1 of the Real Housewives of New Jersey Reunion? 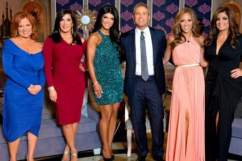 It’s nice to see that Jacqueline and Teresa are still friends again. 8:03pm

I like that they’re starting right away with Teresa’s fraud charges. 8:03pm

#RHONJ Here we go…get ready for @Teresa_Giudice to start blinking at warp speed & licking her lips!

And, Caroline addresses the alleged cheating scandal surrounding her and her husband. She says that someone is a fool if they think it could never happen, but her husband hasn’t cheated. 8:07pm

Teresa says her husband Joe never cheated on her, though Jacqueline brought it up at the last reunion. 8:08pm

Dina Manzo is brought up out of nowhere. 8:08pm

From indictments to infidelity in 6 minutes. Good start. #RHONJ

Now Andy’s talking about Melissa’s book and all the controversy surrounding it. 8:14pm

Having a thought … did Melissa get a nose job? Thinking yes … 8:17pm

Why is Melissa such a big target? Melissa thinks Jan is angry that her salon wasn’t put on the air. 8:19pm

Andy’s getting spicy tonight with his funny comments …

Andy is throwing so much shade with that stripper comment! Hahahahaha! #RHONJ

Oh my! Did @Andy just say that! 'because you used to be a stripper'?? #RHONJ

Whoa! Teresa says Melissa has a deal with tabloids to feed them negative stories about Teresa so that they won’t write bad stories about Melissa, but it sounds fishy … 8:21pm

Teresa just brought that up out the blue then bring it out in front of Melissa without sayin it to her ahead of time! #RHONJ

Andy Cohen clearly does not like Teresa! The sideeyes he gives her everytime she opens her mouth kill me! #rhonj

How gorgeous is @KathyWakile? I see her everyday of my life and can never get enough! LOVE her so much! #RHONJ

Kathy’s hubby fires back at fans all the time on Twitter and she defends her man! 8:27pm

Big Announcement: Ashley is living back home with Jacqueline! Will there be a lot more Ashley next season?! 8:28pm

Every time Jacqueline talks about her Autistic son, I cry. 8:29pm

For more info on Jacqueline’s son and how she deals with it, check out my interview with her by clicking right here. 8:31pm

And Jacqueline wins the crown for most plastic surgery! 8:32pm

So…Melissa is mad that Teresa won't flip tables to defend her against cheating rumors. Wow. #RHONJ

Teresa says she’s been hanging out at her own shore house and not making much effort to hang out with her sister-in-law Melissa. 8:41pm

Caroline Manzo says Melissa always has her guard up around Teresa. 8:41pm

Nothing from Joe Giudice so far … 8:41pm

Aunt RoRo in the house!! Catch @RosiePierri tonight in the clubhouse with @Andy and @LanceBass! @BravoWWHL #RHONJ

Lmao people who think Rosie or the other #RHONJ cast have "anger issues" clearly have never visited our state. It's how we're wired. Deal.

Juicy and Rosie! Aww I love me a pair of funny lezzies. #RHONJ

Ima need Juicy to go to the bathroom before he explodes. Those sounds don't seem normal. #RHONJ reunion

Joe Gorga says the fight with Joe Giudice was the best thing that ever happened, saying it made him realize he loves Joe Giudice. 8:56pm

Uh oh … What does Teresa know about Melissa Gorga? 9:00pm

I TRY TO BRING OUT THE BEST IN EVERYONE !!! @bmandi13: @Bravotv @RosiePierri #RHONJ She brings out (cont) http://t.co/9WCcLejvQH

Who has more of a horse face – Penny or that dude, Kim D. #rhonj

Andy Cohen breaks it down for Teresa, trying to get Teresa to fess up about feeding lies and stories to the mischievous Penny about Melissa. 9:10pm

FYI production wanted me to attend the #RHONJ but declined! after watching it! I think I made a good decision!

Funny how Johnny and Penny sued everyone involved except for Teresa. If she was the mastermind, wouldn't she be forced to testify? #rhonj

Dr. Vee is SO gorgeous, but why does she keep screwing with her hair?! She looks ridiculous. Her normal hair is fantastic. #RHONJ

Does Dr. V just like to curse to sound cool? Love her, but I’m leaning towards yes … 9:18pm

Caroline tells it like it is … Calling out Teresa and Melissa. 9:21pm

Whoa! Teresa womans up, saying she wrote a lie about Caroline in her blog on purpose because she was mad at her. Housewives’ history right here! 9:23pm

Now the women are hammering on Teresa to stop trying to attack others when she feels hurt … lashing out instead of coming to the actual person. 9:29pm

Stay tuned until Part 2 of the reunion next Sunday. 9:30pm 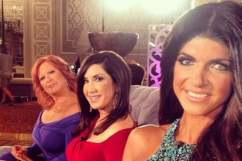