The Duke and Duchess of Cambridge arrive with Prince George for his christening at St. James's Palace pic.twitter.com/1UYaeEHrdo

Prince William and Duchess Kate Middleton were overwhelmed with happiness as their baby Prince George was christened today. Read on for the 5 Fast Facts on the Royal Christening.

1. The Clarence House Has Released All the Service Details

The Duke and Duchess of Cambridge have chosen two hymns, two lessons and two anthems for the christening of their son, Prince George.

Find the full details of the service program for Prince George’s Baptism:

The Duke and Duchess of Cambridge have chosen two hymns, two lessons and two anthems for the christening of their son, Prince George.

The Hymns are Breathe on Me, Breath of God and Be Thou My Vision.

The anthems are Blessed Jesu! Here we Stand (Richard Popplewell) and The Lord Bless You and Keep You (John Rutter).

The anthems will be performed by The Choir of Her Majesty’s Chapel Royal.

The Processional Organ Music will be J. S. Bach’s Fantasia in G (BWV 572).

The Recessional Organ Music will be C. M. Widor’s Toccata from Symphony No 5.

According to NY Mag:

Prince George was doused with water from the River Jordan and dunked in the Lily Font (a birdbath-shaped receptacle decorated with gilded flowers, not to be confused with a type of lettering) at the Chapel Royal at St. James’s Palace.

The palace calls today’s ceremony “informal” and “intimate,” lasting only 45 minutes. After the service, there will be a private tea in Clarence House, hosted by Prince Charles and Duchess Camilla. The cake for the christening is actually a tier taken from Prince William and Kate’s wedding cake.

2. The Royal Family All Showed Up to Celebrate Prince George

The Royal family has gathered together in honor of Prince George’s christening. Even the Queen is in attendance. The St James’s Palace detachment of The Queen’s Guard has shown up in Colour Court for The Queen’s arrival. She will be received with the Royal Salute.

The Queen, The Duke of Edinburgh, The Prince of Wales, The Duchess of Cornwall and Prince Harry have arrived for Prince George's christening

Only 22 guests were invited to the event as Kate Middleton and Prince William named 7 godparents to their child. NY Mag lists them as:

Prince Harry’s girlfriend was not invited to today’s celebration.

3. Some of the Baptism’s Anthems Were Written Specifically for Prince George

The anthems that were sung at today’s christening were written just for the occasion. How touching! They were sung by The Chapel Royal Choir. Here is a little background on the choir, as provided by The Clarence House:

The Choir of Her Majesty’s Chapel Royal comprises six Gentlemen-in-Ordinary, who are professional singers, and ten Children of the Chapel Royal, boy choristers who hold the Sovereign’s choral scholarships at the City of London School, and wear Gold and Scarlet State Coats, still tailored to the Royal Warrant of 1661.

At St James’s Palace, the Chapel Royal choir sings on Sundays weekly in the Chapel Royal or The Queen’s Chapel facing Marlborough Road, and at other events elsewhere as commanded by The Queen. These include the annual Royal Maundy service, the Remembrance Sunday Parade at the Cenotaph in Whitehall, and, in recent years, the wedding of Prince William to Catherine Middleton at Westminster Abbey, in addition to the Golden and Diamond Jubilee Services at St Paul’s Cathedral.

Choirs of other Chapels Royal under the authority of The Dean of the Chapel Royal, whose Ordinary is The Queen, continue to operate simultaneously at the Tower of London and Hampton Court Palace.

The anthems are Blessed Jesu! Here we Stand (Richard Popplewell) and The Lord Bless You and Keep You (John Rutter).

4. Here Are Some of the Photos From the Christening

Enjoy some of the tweeted photos of the big day …

Royal christening: Kate and Wills are being taken in by the Archbishop of Canterbury himself… pic.twitter.com/VNzEWHyxcg

Prince George is wearing a christening robe made by the Queen’s couturier, Angela Kelly.

5. Prince George Has His Own Coin in Celebration of the Christening

The Royal Mint has released a coin for Prince George's christening. It's worth £50,000…. pic.twitter.com/n4pFUbWm1O 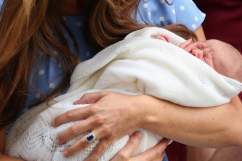