The Fall is upon us, which means your local movie theater is set to feature some fresh new film experiences. For all those hardcore Lord of the Rings/Hobbit fanatics out there, December is the month they need to look forward to. Bilbo the Hobbit and his local band of Middle Earth Dwarves return for another grand adventure. This new official main trailer for the film showcases Smaug’s intimidating voice, gigantic spiders, Legolas and Woodland Elves.

Everything you’re inner nerd wants to see in this upcoming film makes an appearance during this action-packed trailer.

Share the latest trailer for the new 'Hobbit' film!

The Hobbit: The Desolation of Smaug is hitting theaters on December 13, 2013. Bilbo and his Middle Earth heroes seem like the perfect Christmas presents, don’t they? 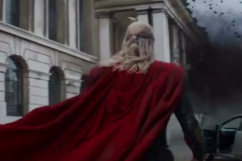 Read More
Lord Of The Rings, Movie Trailers, Movies, The Hobbit, The Hobbit Desolation of Smaug
The latest trailer for the next theatrical adventure for "The Hobbit" looks awe inspiring.