The season 4 debut of The Walking Dead is here at last. What’s going to go down in the prison now that there’s a lot more (human) bodies filling it? Tune in here for live updates, photos, and Tweets surrounding the first episode from the fourth season of The Walking Dead.

Stay tuned on this page for live updates!

Thanks for tuning in, folks!

So everything got cleared out, guys. Sorry about that. Here’s some quick highlights in succession:

– There’s a pretty sweet farm on the prison yard. We meet a new pig called Violet, too.
– The days seem to be filled with zombie hacking, farming, BBQ’s, story time, bickering kids and rampant love making.
– Darryl has a fan. His handshakes consist of licking three fingers and waiting for your approval. That’s how real man shake hands.
– Seems like everyone’s found a lover. It’s cuffing season on The Walking Dead lol.
– Michonne had the most epic entrance of all. She came through The Lone Ranger. She brought comics and a clipper along, too. The ebony, horse riding samurai = Best Character on the Show (next to Darryl).
– Crazy, dirty lady in the woods cheeped Rick out for a bit (and me, too).
– The new guy who asked to come during the supermarket raid inadvertently got someone killed. He just couldn’t leave the alcohol aisle alone, did he?
– ROOF ZOMBIES! IT WAS RAINING ZOMBIES! Best part of the whole episode, by far.
– Beth’s boyfriend bit the bullet…actually, he got bit (a lot).
– So one of the commercials shown featured Assassin’s Creed 4: Black Flag backed by Drake’s “Started from the Bottom.” Weird combination there, ain’t it?
– #RIPVolet was trending. Fans love the pig more than the humans lol.
– That lady Rick met in the woods? She tried to off him, but ya still gotta feel for her. The things she had to go through up until her suicide broke her physically and mentally.
– Carol’s story-time turned into “Knife Wielding for Kids.” Hey, ya gotta start the lil’ ones early…
– The body count was in the double digits for this episode, Humans, zombies and animals all headed into the afterlife…
– Looks like the water supply’s now no good whatsoever.

Hit up the link below for a full recap of what happened: 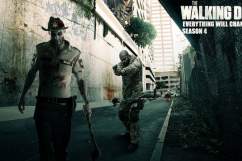 If the Walking Dead doesn't end on a cliffhanger featuring a horde of zombie pigs I'll be sorely disappointed.

The Walking Dead kills off way too many characters. Beth has a new boyfriend…aaaand he's dead. Carl has a new friend, nevermind he's dead.

I quit I can't do another season of walking dead, I'm too attached to some of these characters.

What a wait & what a night! Thanks everyone for showing up for TWD, for your INCREDIBLE support of #TheWalkingDead We're back because of U!

Cuffing season during the Apocalypse too "@__YouNeedJesus: Everybody is booed up on the Walking Dead"

Sneaky Carol! You kill or you die. She gets it. #TheWalkingDead

Woah woah.There are 1 too many black ppl alive at one in walking dead. Sombodies got to go.. [Kevin Hart Voice] #walkingdead #thewalkingdead

Clean up in aisle 3. #thewalkingdead

Wait, so she brought Rick all the way out there so she could commit suicide. Rick didn't even get to let his gun fire, b. #TheWalkingDead