It looks like everybody has a sex tape these days and Tori Spelling is no different. In her newest book “Spelling It Like It Is,” the Hollywood star admits that she and hubby Dean McDermott have a sex tape. Apparently, in 2009 on Valentine’s Day, the couple recorded a homemade sex tape. Allegedly, one of McDermott’s “friends” later claimed they copied it off of the couple’s computer. TMZ reports:

Spelling says her lawyer quickly went on the attack and they didn’t hear from the man again, but now the cat’s out of the bag …

This is a serious offer for a real tape and it could yield significant returns to help you through your difficult financial situation.

But, before Hirsch officially makes an offer, he wants to see a clip of it to verify the authenticity of it. 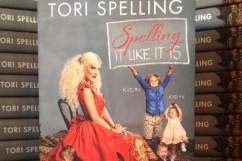