Marvel has released the full length trailer for Captain America 2: The Winter Soldier starring Chris Evans and Scarlett Johansson. The star-spangled avenger returns in the new film that explores the aftermath of The Avengers. Steve Rogers is living Washington D.C. attempting to adjust to modern times when an attack on SHIELD colleague brings him back into action. He teams up with Black Widow to uncover a conspiracy that forces him to deal with the ghosts of his past. Captain America 2: The Winter Soldier opens nationwide April 4, 2014. 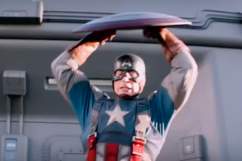