Today a 7-second sneak peek teaser was released on Instagram for X-Men: Days of Future Past. The official trailer won’t be released until October 29, and the film won’t be out until May 23 2014. For now let’s just revel in the bad-assery of two generations of X-men colliding on Instagram.

In just the few seconds of footage we can see some old favorite and new joining the mutant scuffle, including Wolverine, Magneto, and Dr. X:

as well as all your other favorites. 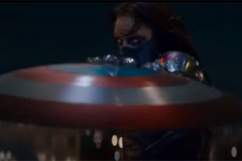 WATCH: The First Trailer For ‘Captain America 2: The Winter Soldier’ (2014)