Charlie Sheen is livid that his ex Brooke Mueller’s brother has gained guardianship of his twin boys because the judge is allowing Scott to reside with Brooke. In turn, the boys would essentially be living with their mother and she does not have full custody. 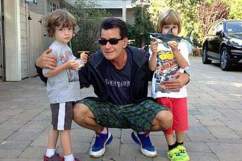 TMZ has reported some of the awful yet amazing words the fantastic Charlie Sheen has come up with as a reaction to the current state of his sons’ custody status. Here they are:

This pig circus overflowing with buffoons, sycophants and heretics cannot be trusted to safely raise a colony of ferrets.

Brooke will fail and her brother [who lives by the beach] will be selling his ass under a pier and the evil nanny will die from ugly.

When, not if, this psychotic and desperately irresponsible sham goes sideways, DCFS will burn to the ground, topped off with the smoldering robe of the judge.

Aside from this, Sheen has also taken to Twitter to vent in sensational Sheen style. Read the tweets below.

oh, by the way, nice try this morning Brooke. you are a chubby weirdo who will lose at every turn trying to get between me and my boys. c

happy Bday Brooke when you're done sucking off the parking lot at Home Depot why don't ya 'blow' out this candle. c http://t.co/sw1K4LI7BS

Ah, a day in the life of Charlie Sheen …