The television premiere coincides with movie theater screenings of the episode worldwide.

You can also check out our predictions for the episode here. 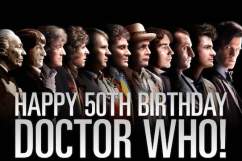 Find the Channel Screening Doctor Who in Your Country

For most of the world, BBC Entertainment, BBC Latin America, or BBC America. For those other countries, such as Australia, Canada, Russia, France, Finland, South Korea, Germany, or Italy, check the complete list here.

For those using Time Warner Cable in New York City, you’ll be able to watch the show on channel 71. For other U.S. viewers, you can check out where BBC America is for your television with this handy BBC America zip code-channel finder.

What Time Can I Watch ‘The Day of the Doctor’?

The Doctor Who 50th Anniversary episode will begin at 7:50 G.T. in England, which means that the rest of the world must figure out what time that is in our own regions.

You an also use this handy time zone converter to alleviate any fears.

Don’t forget that the pre-show begins 20 minutes before the episode begins.

Read More
Doctor Who, TV
The premiere is being screened simultaneously in theaters and on television networks across the globe.