Maksim Chmerkovskiy is a seriously talented dancer, choreographer, and former cast-mate on Dancing With the Stars. He’s the object of many women’s desires and we’ve got the Top 10 Facts all about Maks right here.

1. Maksim Was Known as the Bad Boy on Dancing With The Stars

Maksim Chmerkovskiy would often bump heads with judges and cast members when he was a dancer on DWTS. He was strict with his celebrity contestants and was often said to be too rough or mean. However, this made the audience love him for the bad boy he was. Have a look at this clip, which shows a little of Maks’ “attitude.”

2. Returning to DWTS as a Guest Judge was Difficult for Maks

Maksim Chmerkovskiy is going to join the judges’ panel on Dancing With the Stars. While many female fans are drooling in excitement, returning to the show as a judge wasn’t an easy decision for Maks to make. When Maks was a dancer on the show, he was harsh in his critiques of Len Goodman, Carrie Ann Inaba and Bruno Tonioli’s judging styles. Now that he’ll be holding the number paddles, he’s a little nervous. He doesn’t want to be a hypocrite. Maks revealed to People:

I have to be the person that I thought they should have been at the times I disagreed with their remarks. It will be interesting for me to see, ‘Now you are in a position that you criticized before. Let’s see you do better.

If you’re excited for Maks’ return, use the hashtags #MAKSISBACK and #JudgeMaks when you do your DWTS tweeting.

Maks gushed to People about his relationship with the voluptuous supermodel Kate Upton saying: She is extremely intelligent. We talk about everything including politics. She got everything pretty much herself and I respect that. I love how she can go from being girly to being a businesswoman in the snap of a finger. 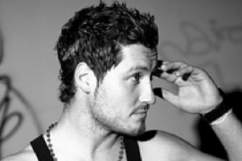 Val Chmerkovskiy of DWTS: Top 10 Facts You Need To Know

Maks was on Dancing With the Stars for several seasons before his little brother Val jumped on the DWTS scene.

Click on the “Next Page” link below to read about when Maks was handicapped, his acting skills, his love life, and more.