Margot Robbie, 23, is a hot Aussie actress in Hollywood, a definite rising star. Check out the 5 Fast Facts on Robbie here …

1. Robbie is the Co-Star in Will Smith’s Movie & His Cheating Scandal

According to Star Magazine and several other sources, Will Smith had a scandalous night with Margot Robbie down in New Orleans, Louisiana. Smith, 45, and Robbie are said to have had an inappropriately steamy photo booth session at the party they attended after a day on set. 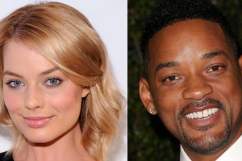 Will Smith’s Cheating with Margot Robbie? 5 Fast Facts You Need to Know

Currently, Robbie is co-starring in Will Smith’s film Focus.

2. Leonardo DiCaprio Has Gotten Down & Dirty with Robbie

Robbie and DiCaprio will be starring together in Martin Scorsese’s film The Wolf of Wall Street where Robbie plays Leo’s super sexy wife. Check out the trailer below.

3. Margot Robbie Grew Up on a Farm

Raised on her grandparents farm on the Gold Coast of Australia, Robbie came from somewhat humble beginnings. She was a college graduate who moved to Melbourne to pursue acting. With success overseas, she moved to Hollywood where she landed a role on the ABC drama Pan Am before moving on to big Hollywood films.

4. Robbie Was a Series Regular on a Soap

Margot Robbie played the character of Donna Brown in a TV Soap Series titled Neighbours that was filmed in Australia. Check out this clip from the show.

Check out some of these seriously awesome photos of Margot Robbie getting into the holiday spirit for Halloween.

Will Smith’s Cheating with Margot Robbie? 5 Fast Facts You Need to Know