Apparently, A-list couple Mariah Carey and Nick Cannon may be on the rocks. In a recent interview with radio station Hot 97, Carey admitted her marriage to Cannon is less than perfect stating that their first year of marriage was easy. But, in 2009, he began working for America’s Got Talent and he has been constantly working ever since. All work and no play makes Mariah Carey a sad girl … and who could blame her?

Radar Online reports that the couple hasn’t been photographed together in over a hundred days … Now, for some couples that’s not a big deal, but for celebrity couples who are always in the spotlight, it’s a little odd.

In Carey’s same interview with Hot 97, she reveals that she and hubby Cannon are living on opposite sides of the country, explaining:

Radar further reports that Carey does not support Cannon’s comedy.

When host Angie Martinez brought up Cannon’s stand-up comedy, which often references the couple’s marriage, Carey said, “I hate it.” … “In his world, he feels, in the world of comedy, that he can have license to say things that he wants to say … But, if it goes too far, that doesn’t mean I’m not gonna say, ‘Check please.

Revealing that his next act contains more intimate information about their relationship than ever before, Carey insisted, “I can’t tell him don’t talk about this at that. But for me, I look at certain relationship in the public eye, and I think, ‘See that’s class, when you don’t have to talk about that relationship that much.�� I’d much prefer that he silencio, just a little bit.”

Uh oh. Could this be the beginning of the end for the couple? We hope not … 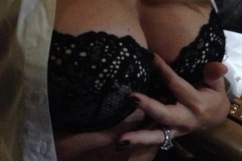 Read More
Celebrities, Mariah Carey, Nick Cannon
Nick Cannon and Mariah Carey haven't been photographed together in months. Carey has revealed the strain on their relationship in a recent interview ... Read on.