Recently released WWE wrestler Matt Striker probably didn’t think the tweet he posted above would get so much vitriol from his followers. But everyone who laid eyes on that tweet already knew just how bad that joke would be taken.

Striker’s tweet was posted in response to the recent win of the World Series by the Boston Red Sox. His tweet made light of the Boston Marathon Bombing by alluding that the NY Knicks would become NBA champs if a similiar tragedy transpired in NYC.

Check out Striker’s reactions to people’s responses and a few people’s tweets to his tasteless comment below:

Ok look the tweet about the RedSox wasnt designed to attack any memory or event so relax urselves.

@Matt_Striker_ People will complain no matter what you do. There's always someone taking offense. Damn political correctness…

.@Matt_Striker_ Good thing you no longer work for a publicly traded company because after your Boston joke, you'd be gone anyway.

If you’re interested in seeing what Matt Striker thinks about his WWE run, check out his shoot interview trailer above. 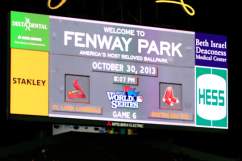