Fast and the Furious star Paul Walker has tragically died. Read on for the sad facts on the horrific accident that took beloved actor Paul Walker’s life.

1. Walker Has Died in a Gruesome Car Crash

TMZ, along with many other sources, has reported that Paul Walker died this afternoon in a car crash in California, where he was riding in the passenger seat.

The accident happened in Santa Clarita — north of Los Angeles — and according to multiple sources connected to Paul … the actor was in a Porsche when the driver somehow lost control and slammed into a post or a tree … and then the car burst into flames.

According to the Santa Clarita Valley Signal:

Spectators gathered at the scene, and several said the driver was the star of “The Fast and the Furious” series of films. One witness at the scene said he tried to put the fire out and recognized Walker inside the vehicle

A sheriff’s deputy at the scene said the Porsche driver appeared to have lost control of the car, which hit a tree. Both a tree and a light standard were downed at the scene.

2. The Accident Occurred During a Test Drive

Sources close to Paul tell us he was in Santa Clarita for a car show to support the Philippines typhoon relief effort, and had been taking friends out for rides in his new Porsche GT. The accident happened during one of those test spins.

Apparently, two people were killed in the crash, including Walker. The Santa Clarita Valley Signal writes:

The single-car crash occurred around 3:30 p.m. on Hercules Street near Constellation Road in the Rye Canyon Business Park, fire officials said … The red Porsche was reduced to unrecognizable twisted metal in the single-car crash.

Him and his buddy, his brother in arms at heart just decided to joyride, take a spin. Something we all do. We’re all car enthusiasts. … We’re all here driving, enjoying each other, and God must’ve needed help,” said Antonio Holmes, who said he was a friend of Walker … We all heard from our location (the accident). It’s a little difficult to know what it was. Someone called it in and said it was a vehicle fire … We all ran around and jumped in cars and grabbed fire extinguishers and immediately went to the vehicle. It was engulfed in flames. There was nothing. They were trapped. Employees, friends of the shop. We tried. We tried. We went through fire extinguishers.

Such horrific news … Fast and the Furious co-star Vin Diesel has been mourning his dear friend’s death, expressing his grief online:

Not only has Walker’s rep confirmed the star’s death, his personal Facebook page has posted an official statement:

It is with a truly heavy heart that we must confirm that Paul Walker passed away today in a tragic car accident while attending a charity event for his organization Reach Out Worldwide. He was a passenger in a friend’s car, in which both lost their lives. We appreciate your patience as we too are stunned and saddened beyond belief by this news. Thank you for keeping his family and friends in your prayers during this very difficult time. We will do our best to keep you apprised on where to send condolences. – #TeamPW.

It's with a heavy heart that we must confirm Paul Walker passed away today in a tragic car accident…MORE: http://t.co/9hDuJMH99M – #TeamPW

I’m grateful I had her (daughter) at 25 and not 20 because, at 40 and 15, we’re matching up sweet! She’s been with her mom her whole life and she wants a relationship with her pops. It’s working out really well right now.

"@justinbieberID: a picture of Justin with Paul Walker's daughter pic.twitter.com/jvAKC61E4C" she is very cute

4. This Is Walker’s Car Before and After the Crash

Presently, Walker’s 7th installment of the Fast and the Furious movie series is in the middle of filming. It’s unclear as of now what will happen with the film.

The driver in the crash has been named Roger Rodas, an experienced race car driver.

5. Some Sources Are Claiming Walker’s Death to Be a Hoax

R.I.P, Paul Walker you and your skyline will never be forgotten !pic.twitter.com/mYEQPaIV2H

While, the news of Walker’s death spreads, there are a few sources that claim this news is a hoax. We were crossing our fingers, but Paul Walker has unfortunately passed away. A man from the town where the accident occurred posted this online:

So I work in Santa Clarita at an automotive performance shop and a good customer just came from Paul’s shop, AE (Always Evolving) where they were having a car show. It seems Paul went for a ride in a guys Porsche and they ended up around a phone pole, the car burst onto flames and rumour has it Paul is dead. I hope he got it wrong but he insists it was Paul. I’m reluctant to post this being just hearsay, but the guy who informed us is a wealthy car enthusiast that just pulled up in his Maserati and nothing to gain from a lie, and has video on his phone of the burning car. If it does turn out to be true, damn… RIP Paul.

Unfortunately, this is not a hoax and the beloved actor has, in fact, died. Universal Pictures has released a statement in regards to Walker’s passing:

All of us at Universal are heartbroken. Paul was truly one of the most beloved and respected members of our studio family for 14 years, and this loss is devastating to us, to everyone involved with the ‘Fast and Furious’ films, and to countless fans. We send our deepest and most sincere condolences to Paul’s family.

Paul Walker was a passionate advocate for shark conservation. If you were a fan of his, consider making a donation: http://t.co/c16efoxULg

We send our love and thoughts to those who knew and loved the actor, as well as his many fans. 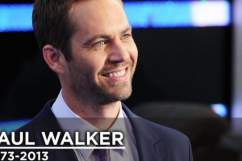