The guys from The Wanted appeared on Ellen to perform their hit “We Own the Night,” but to also act as guest DJ’s in Ellen’s DJ Booth. Check out this little “Three Stooges” kind of moment that the boys had on the show.

Towards the end of their performance, each of the guys dances off into the audience, hugging fans and acting goofy while singing … Can’t get over how cute these boys … Also, how amazing are Nathan Sykes’ pipes? Where does that solid, deep voice come from? 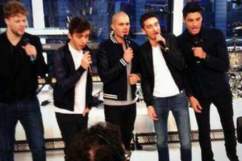 WATCH: The Wanted Perform ‘We Own the Night’ on Good Morning America