Adorable boy band The Wanted took over Times Square, performing on Good Morning America this morning. It’s no coincidence that the band’s new album “Word of Mouth” has dropped today either. The Wanted kicked things off singing “Glad You Came” for fun before their official GMA concert.

Everyone tune into @GMA this morning to see us performing live!!!

After a quick chat about their upcoming world tour, the guys talked about their appreciation for their fans. Band-mate Max George then discusses their new album, calling it their best yet, two years in the making. Then the boys begin their performance by singing their song “We Own the Night.” Their second performance was their song “I Found You.” Check it out below.

.@_Denaaaaxo 's picture of The Wanted on GMA this morning http://t.co/cDGA4AGWku 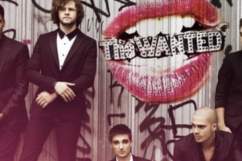