Former star of The Hills Whitney Port is engaged! People has confirmed that Port said “yes” to her boyfriend Tim Rosenman.

1. Rosenman Was an Associate Producer on Port’s Show The City

The City was a spin-off show of The Hills on MTV where Whitney Port moved to New York City and struggled to become a big fashion designer. It was there that she met her now fiance Tim Rosenman, who was working as an associate producer on the show.

2. Port Began Dating Rosenman After She Broke Up With Her Co-Star

The couple began dating in 2012 after Port broke it off with her co-star Ben Nemetin from The City.

The two kept in touch, having crushes on each other for a while until they began to actually date, according to US Weekly. 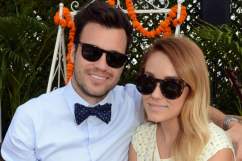 I am very excited to share with you guys that William and I got engaged over the weekend. I am beyond thrilled! Get ready for lots more wedding content here on LaurenConrad.com as we begin the planning process. UPDATE: William and I are overwhelmed by all of your warm wishes. Thank you so much for sharing in this special moment :-) XO Lauren

4. Port’s Wedding Will Not Be a Reunion of The Hills

When asked about her guest list for her wedding, Port basically told People that her former cast-mates would not be invited.

I think we all kind of went our separate ways once the show ended … I’m fine with it, like I’m at peace with it. With me, I never feuded with anyone, and nothing ever ended badly, so it just naturally happened.

5. Rosenman Draws In Port With His East Coast Attitude

Rosenman is a native to New York, while Port is a California girl who currently resides with her sister in Venice, California. But, Port actually is drawn to her fiance’s New York knowledge. US Weekly reports an insider revealing:

She is super comfortable with him and in love. She likes that he is from New York because he is such a great tour guide when they visit the city.

Read More
Celebrities, The Hills, Whitney Port
Whitney Port is officially engaged and the lucky man is Tim Rosenman ... Check out all the details of their engagement and background on Port's new fiance.