Tom Cruise’s bizarre lawsuit deposition has been leaked online by The New York Post, and in it are some absolute gems.

The lawsuit is relating to In Touch and Life & Style magazines which published articles that accused Cruise of abandoning his daughter Suri. It’s alleged during the deposition that Cruise and Suri’s mother, Katie Holmes, split because she was trying to protect her from Scientology. 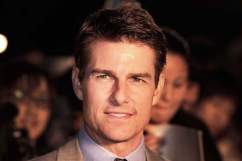