Amazon has released the trailer for one its new shows called ‘Alpha House’. Starring John Goodman, the streaming show will follow four senators who live in a house together as they work in D.C. The comedy was one of the popular pilots that premiered last April. The pilot received great reviews and Amazon Studios decided to produce the show. It will appear online in November but will be much different than the options Netflix offers. The first three episodes will be free but the rest require an Amazon Prime subscription so no bingeing allowed. Watch the trailer above and the official description is below.

Alpha House, which was written by Academy Award nominee and Pulitzer-Prize winner Garry Trudeau and produced by Trudeau, Elliot Webb and Jonathan Alter, is a comedy about four misfit senators (John Goodman, Clark Johnson, Matt Malloy and Mark Consuelos) who rent a house together in Washington DC. The roomies are joined by Cynthia Nixon (Sex and the City), Amy Sedaris (Strangers with Candy), Wanda Sykes (Curb Your Enthusiasm), and Julie White (Go On), who share in the outrageous—and sometimes all-too-real—follies of Washington politics. 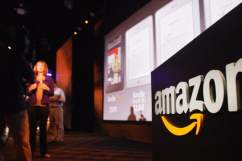