So chances are you’ve already watched the James Franco and Seth Rogen parody of Kanye West’s Bound 2 video already. Stop laughing at your work desk for a few minutes and ask yourself this question — did they really shoot Kanye’s music video on a shot-by-shot basis? Turns out Franco and Rogen actually paid every little attention to detail with their hilarious rendition of KimYe’s excuse for “art.”

Check out the video above to see both videos being put on display in a side-by-side comparison vid. Franco and Rogen definitely got it right. Shout out to AnimalNewYork.com for putting together this awesome piece of footage. 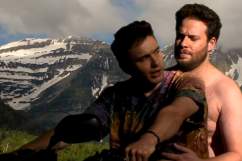