The Exorcist made quite an impact when it arrived in theaters. Deemed the “scariest movie ever made”, the film was adapted from William Peter Blatty’s novel. Audiences struggled to make it through the first screening and the film lives on forever in the horror pantheon.

Due to the subject matter, the studio execs at Warner Bros at the time had to consider how they would promote it. The video posted above is supposed to be the original trailer that they considered to be too intense. Other sources are claiming this to be the banned trailer that never made it to theaters. While it would have been a great marketing tactic to launch this cut, the shots that were cobbled together may have been too intense for viewers. Check it out and let us know what you think. 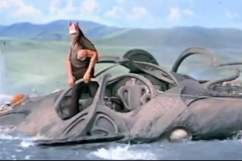 Read More
Movies, The Exorcist, Warner Bros
A new trailer for The Exorcist has appeared online claiming to be the original version Warner Bros felt was too intense to show in theaters. Watch the video here.