Ashton Kutcher mans up in a new selfie. The Two and a Half Men star took to Twitter to show love for his girlfriend of over a year and a half.

On December 11, Kutcher tweeted a photo that shows him kissing Kunis in the dark with the caption “Sunset.”

Kunis, 30, and Kutcher, 35, met on the set of “That 70’s Show” and Kunis has gushed that Kutcher was her first kiss. Kutcher may be the last man she locks lips with, as engagement rumors are spreading now that Kutcher’s divorce to Demi Moore has finally settled.

It’s no coincidence that Kutcher waited to post the first intimate photo of him and his new girlfriend. Although he filed for divorce in December of 2013, it has taken a year to get it finalized. TMZ reports that Moore wanted spousal support. The two separated in 2011, ending their marriage that began in 2005.

Kutcherwaited for a year to file because, supposedly, he wanted to give Moore the chance to do it first. Of course, Kutcher and Moore made headlines in 2003 when they started dating at 25 and 40 respectively.

Mila Is Wearing a Gold Band on Her Ring Finger

One of the accessories she wore at her brother’s wedding on December 7 was the same gold band she debuted in September.

Kunis took Kutcher as her date to her older brother’s nuptials. According to People Magazine, Mila’s new sister-in-law is the ballerina who trained her for her role in Black Swan. Kutcher and Kunis paid for the newlywed’s honeymoon, a 10-day trip to Australia.

Ashton Is Quoted Saying He Wants His Relationship Kept Private

Although the couple are frequently photographed together courtside at Lakers’ games, Kutcher has made it clear that he’s made mistakes in the past and does not want his new relationship in the public eye.

In the April issue of Elle magazine, Kutcher said, “You know, I’ve learned the hard way how valuable privacy is. And I’ve learned that there are a lot of things in your life that really benefit from being private. And relationships are one of them. And I am going to do everything in my power to have this relationship be private.”

The 51-year-old reportedly sold her five-carat ring to a Beverly Hills consignment shop. According to Radar, the single mom is heartbroken and wants to rid herself of any reminder of her ex husband. 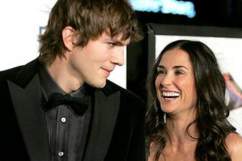 Ashton and Demi Divorce: How Much Will They Pay?