This is not hot. The 24-year-old brother of Paris Hilton claims that Lindsay Lohan’s friend beat him up at a Miami party on December 6 after some instigating on Lohan’s part. The next day, Barron posted a picture of his battered face, sparking the investigation. No arrests have been made so far since Barron is avoiding the police. Sister Paris took to Instagram to retaliate. She said, “No one f—s with my family and get away with it!!”

1. He Once Got a DUI and Was Sued For Hitting a Man With His Car

In 2008, a gas station worker sued Barron for 4.6 million after the Hilton heir hit him with his car. According to the Daily Mail, his parents took out $10 million in equity on their Bel Air mansion following the lawsuit.

2. His Attacker is Supposedly a Friend of Lohan

Ray LeMoine, a New Yorker who once owned the bar Heathers in the East Village, supposedly hit Barron after he refused to leave a party at his home. He is a contributor to the website Vocativ and writes his take on the event in a recent post. “Barron got in my face and wouldn’t shut up about his stupid family. Eventually things got so heated that he pushed me. And that’s when the alleged assault, which, of course, I deny, took place.”

Lohan’s dad told Hollyscoop that Barron was taking cocaine at the out-of-control party. The animosity between Paris and Lindsay goes back to 2006, when Paris’ oil-heir friend Brandon Davis went on a rant about the former child star. In the TMZ video, Paris laughs as Davis screams sexual comments about Lindsay

3. Lohan Denied She Was There At the Time of the Brawl, But a Video Emerged

She says she was not at the party at the time the fight broke out. TMZ spoke to her father, who also claimed she left beforehand. However, in the video above, taken of Lohan leaving the party the morning after, she says, “I saw nothing.” On the days following the alleged attack, Lohan did not make any statements on social media, but did take to her Twitter page to show herself in yoga positions.

4. Barron Is not Cooperating with Police

According to a Daily News report, Barron refused to have Miami Beach cops take pictures of his face to use as evidence. Sargent Bobby Hernandez of Miami Beach Police told the paper, “We are in standby mode until we get more information and speak to the victim himself,” he said. “If the victim doesn’t want to cooperate, it ends at that point.”

According to her Facebook page, she is lives in New York City. 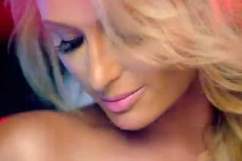