The Walking Dead’s Norman Reedus is proving that his love life is very much alive. When he held hands with Cecilia Singley on Z100’s Jingle Ball’s red carpet in New York City on Friday, the 44-year-old actor confirmed his relationship with the 20-year-old model.

Singley was living in New Orleans and took some modeling shots with Miami Beach- based photographer Megane Claire. Claire asked Ford to look at the pictures she had taken of Singley, and the aspiring model got a contract that very same day.

Fans of Reedus, who plays Daryl Dixon on The Walking Dead, have much to say about the couple’s significant age difference. In fact, there are already forums debating their relationship. In the Spoil the Dead forum, which discusses topics from the television show, one fan had this to say:

All you people saying this is “OK”, just wait until your 19 year old fresh faced little angel comes home with some 45 year old grizzled old man. Sorry, but, it’s gross and nasty.
The girl was just in HIGH SCHOOL 2 years ago. Norman was in High School 30 years ago. There is something wrong with him. Sorry Norman Reedus fans, but there is something very big wrong with him and it’s not sweet or cute or worthy of your adoration and rabid fan protection. Like Oprah says “Once someone shows you who they are, believe them”.

3. She Moves Around A Lot

“I sleep on someone’s couch, I am not really in one place for more than 3 months (in the year I have been doing this, I spent 3 months in Miami, 3 months in Paris, and I have now been in NYC for about 5),” she told the Huffington Post in April.

She also dished to Huffington Post that she never limited her diet and credits that to being part French. “I was raised to eat everything. My Mom is French, so there was always lots of fruit, bread and salad on the table. I was taught to include all of the food groups. I eat pretty much whatever I want, although I try not to eat massive amounts of anything. But honestly, I am super low maintenance and I can’t say I have ever dieted.”

5. She Works With One of the Most Famous Agencies in Paris

The swimsuit and underwear model speaks French and feels like she does her best work in Paris. There, she works with Crystal Models and has a profile filled with many shots of her sprawled out on the beach. “From a work perspective, that was the most successful city for me, I think because in Paris I am different-looking. I am tanned and blond and I have curves,” she told the Huffington Post. 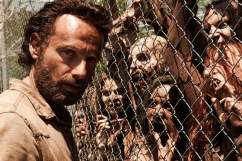 AMC Renews The Walking Dead for A 5th Season; 2nd Season of The Game Also on the Way