Caesar is coming back! And the offical new movie poster you’ll see above shows the evolution of this super genius, warmongering ape.

The ape that everyone loves is making his return in the sequel (prequel?) to 2011’s Rise of the Planet of the Apes – Dawn of the Planet of the Apes. The film, which is slated to land sometime in July 2014, is being directed by Matt Reeves. The stars who’ll be appearing this time around are Andy Serkis (who’s doing the body animations for Caesar), Jason Clarke, Gary Oldman and Keri Russell.

Here’s the official plot workings for the film:

A growing nation of genetically evolved apes led by Caesar is threatened by a band of human survivors of the devastating virus unleashed a decade earlier. They reach a fragile peace, but it proves short-lived, as both sides are brought to the brink of a war that will determine who will emerge as Earth’s dominant species.

The official trailer for the film is dropping on December 18, 2013 (Wednesday). And you already know that Heavy will have it here for all you fans to see. Stay tuned!

Head to the next page to see the other newly released posters for the film! 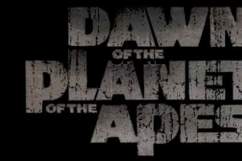 On-Set Movie Pics Released For ‘Dawn of the Planet of the Apes,’ ‘Anchorman 2′