Tonight was the season finale of Showtime’s hit drama series Homeland. This season has been a roller coaster ride, as Brody has gone from international fugitive to CIA operative carrying out a high-risk mission to assassinate Iranian spymaster Danesh Akbari. The wild ride came to a thrilling end in Sunday’s season three finale, “The Star.” Here’s what you need to know:

Saul has quite the operation on his hands on his final day as the director of the Central Intelligence Agency. With Brody (and Carrie) running for their lives in Tehran, Saul is forced to weigh the importance of the mission against his loyalty to the people carrying out the mission.

If their current situation wasn’t tense enough, Carrie spills the beans about her pregnancy to Brody. The audience finally learns Brody is the father of her unborn baby.

While Saul was endeavoring to extract Brody after the assassination of the head of the Iranian secret service, Lockhart was making plans of his own. After seemingly transitioning to CIA director-in-waiting to active CIA director with the wave of a magic wand, Lockhart goes over Saul’s head to have Javadi’s men capture Brody in order to protect the integrity of Javadi’s rule in Iran.

4. Brody Is Sentenced to Death by Hanging

Javadi reveals to Carrie that Brody will be sentenced to a public execution shortly after being captured. In one of the most powerful scenes in the show’s history, Carrie watches on as the man she loves suffocates to death.

Watch the video above to see Javadi tell Carrie Brody will be executed.

Nicholas Brody is one of the most dubious characters in television history. Viewers were never quite sure exactly what Damian Lewis’ character was thinking — right up until his tragic end.

Check out the clip above to see Brody’s heart-stopping final scene.

The audience learns that the U.S. is much closer to peace with Iran when Saul’s wife reads him a newspaper headline while the two enjoy his assumed retirement by the ocean. Here’s what Saul’s wife Mira read from the newspaper:

“In a stunning development at the Geneva Summit, Iranian diplomats have offered IAEA inspectors full and unfettered access to the regime’s nuclear sites in the exchange for lifting of economic sanctions.”

7. Carrie Must Choose Between Motherhood & Her CIA Career

Lockhart offers Carrie a new job as station chief in Istanbul. But Carrie is far along in her pregnancy (it’s a girl!) and must choose between her daughter and career.

Carrie tells her father Frank and sister Maggie she is going to take the job and get rid of the baby. Frank vehemently objects and offers to raise the child if Carrie refuses.

The audience is left without knowing the fate of Carrie’s unborn baby.

Carrie, as usual, is very emotional.

8. Brody Gets Honored By the CIA — Well, Sort Of

Carrie tells Lockhart she thinks Brody should be honored with a star at the CIA’s commemorative ceremony. Lockhart, of course, refuses to acknowledge Brody due to his past crimes against the state.

At the very end of the ceremony, Carrie pays homage to Brody by drawing a star on the wall next to all the other honorees.

9. Redemption – The Theme of the Episode

Redemption is a word that’s tossed around quite a bit in this episode, particularly pertaining to Brody carrying out his final mission.

Redemption is also important for other characters in this episode and throughout the entire show. Earlier this season, we saw Quinn struggle to reconcile with the impossible dilemmas that come with being a CIA operative.

Saul also seeks redemption, particularly for Carrie, who was deceived, misled and even institutionalized as a result of his actions. In an effort to do right by Carrie, Saul ignores Javadi’s advice to facilitate Brody’s capture and puts into play a risky extraction operation. Unfortunately, his efforts are futile as Lockhart gives away Carrie and Brody’s location on his first day as CIA director.

10. Morena Baccarin & Morgan Saylor Will Not Return in Season 4

Two members of the Brody family will not be returning next season. Morena Baccarin (Jessica Brody) and Morgan Saylor (Dana Brody) will not be back — at least as series regulars — in the show’s fourth season, TV Line reported on Friday. 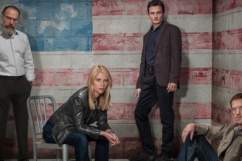