Gandalf, or Ian McKellen, 74, as he’s known in some circles, has revealed that he was told by the UK’s Foreign Office not to travel to Russia due to the country’s anti-homosexuality laws, reports Variety.

The celebrated actor was giving an interview to the BBC’s Radio Times magazine. He said:

They couldn’t protect me from those laws. Two and a half hours from London! In the land of Tchaikovsky, Diaghilev, Rudolf Nureyev — gay artists whose sexuality informed their work.

The British actor has been a gay activist since coming out at the age of 49. In June 2013 Russia passed a series of laws aimed at banning the “promotion” of homosexuality.

While avoiding the Kremlin, McKellen also took time out to “slam” Homeland star and fellow Brit, Damien Lewis. The red haired Lewis suggested he was “concerned” that he would wind up playing a “wizard,” reports The Daily News.

I wouldn’t like to have been one of those actors who hit stardom quite early on and expected it to continue and was stuck doing scripts that I didn’t particularly like just to keep the income up. I’ve always wanted to get better as an actor. And I have got better. You’ve only got to see my early work to see that. 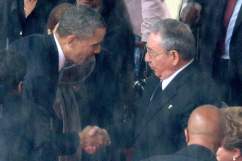