The movie Lone Survivor, the true story about the failed mission of four Navy Seals in Afghanistan will come to theaters on Christmas Day. The video above shows clips of the film intermingled with interviews with the lone survivor of the mission, Marcus Luttrell, and his fallen comrades’ families.

Pictures of the real SEALs who perished in the three-hour gun fight against the Taliban, Matt Axelson, Mike Murphy, and Danny Dietz, flash across the screen. “I had no idea that it would have such an impact and be so inspirational,” said Dietz’s father of the adaptation.

The families’ connection the actors who were portraying their sons on screen is very much apparent.

Donna Axelson, mother of Matt, said, “Mark Wahlberg came up to me and took my arms and looked in my face and said, ‘We are going to do the best we can do to honor these men.'”

Wahlberg plays Luttrell is the film. “I was so apprehensive about it,” said Luttrell about making his memoir into a film to honor his brothers. The video shows Luttrell himself advising the film’s director, Peter Berg during filming.

Berg, who Luttrell hand picked to make the movie, spoke about the significance of his role. He said it was a meaningful experience, “to look into the eyes of a father who lost his son. To know that you’re going to be held up to a certain level of expectation by that family.”

Lieutenant Mike Murphy’s mother, Maureen, spoke of Luttrell’s dedication to the film’s purpose. “I admire him that he wants to let people know, ‘These were my buddies and this is what we went through.'”

At the end of the video, Axelson’s mother reflects on watching the powerful film. She said she told actor Ben Foster, who plays her son, “Thank you for giving me my son back for a few more hours.” 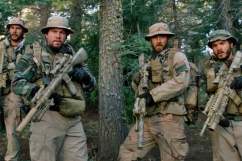