Last night, the cast of Lone Survivor attended the film’s premiere in New York City. The moving account, out on Christmas day, chronicles the heroic acts of real-life navy SEALs during their failed mission in Afghanistan. The premiere also served as a tribute to the fallen soldiers who perished for their country on that day in July 2005. Heavy.com was invited to an advanced screening yesterday.

1. It’s Based on a Memoir by Navy SEAL Marcus Luttrell

The narrative, released in 2007, was written by the only surviving SEAL fire team member. The leader of the mission, Luttrell writes about the struggle and his fallen comrades in this powerful memoir. Friday Night Lights director Peter Berg adapted the book to the big screen. According to The Hollywood Reporter, the movie cost 40-million dollars to produce and shot for 40 days in New Mexico.

The goal of the doomed mission was to capture a leading member of the Taliban. While hiding out in the mountains, the SEALs met with a herd of shepherds, including a young boy. They decided to let the group go, not knowing that they would alert their leaders. The men were soon outnumbered by a fleet of Taliban members ready for combat.


3. Mark Wahlberg, Who Plays Luttrell, Spoke Out at the Film’s LA Premiere

Wahlberg, 42, passionately explained the stark difference between playing a soldier in the movies and serving as one in real life. According to Entertainment Weekly, the actor said, “For actors to sit there and talk about ‘oh I went to SEAL training’? I don’t give a f-ck what you did. You don’t do what these guys did. For somebody to sit there and say my job was as difficult as being in the military? How f-cking dare you, while you sit in a makeup chair for two hours.” Wahlberg did apologize, saying, “I’m sorry for losing my sh-t. Don’t ask any more questions tonight.”

To prepare for their roles, the cast went through a three-week bootcamp in New Mexico. Variety magazine reported on the actors’ rigorous training. “We each had a SEAL assigned to us,” Emile Hirsch said. “We were probably going through 1,000 rounds of M4 bullets a day.”

4. An Afghan Helped Save Luttrell & They Are Still Friends

Actor Ali Suliman, who plays Gulab in the film (Getty)

Mohammad Gulab, who, along with others villagers, rescued the wounded Luttrell on that fateful day, attended the film’s premiere. It was his first time in New York. Because he aided American soldiers, Gulab was threatened and forced to leave Afghanistan. According to The Daily Beast, he is now living in California with his 10 children, given assistance by Luttrell and the publishers of the memoir.

5. The Film Will Be Released on Christmas Day

Taylor Kitsch, Eric Bana, and Ben Foster also star in the film which hits theaters in NY and LA on December 25th. It will open nationwide on January 10th. 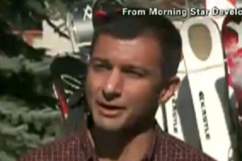