Robin Roberts, the beloved Good Morning America anchor who captured the nation’s heart after undergoing a bone marrow transplant, revealed who has stolen her heart.

To mark the 100th day since her September 2012 surgery, Roberts yesterday posted a letter on her Facebook page, thanking Amber Laign, her “long-term girlfriend.”

Here is what you need to know about Roberts’ 39-year-old partner.

1. Laign’s Originally From the Bay Area

TMZ reports that the two met in San Francisco through mutual friends. They share a New York City apartment, and according to the Daily News, they’ve been living together for 10 years. Robin is 53, so there’s a 14-year age difference.
According to TMZ, Laign was “utterly devoted to Robin when she went through both of her illnesses.” In 2007, Roberts had breast cancer and then in 2012, surgery for Myelodysplastic Syndrome. In August, the couple took a much-needed getaway to Hawaii.

Laign got her massage training at The Swedish Institute in New York City. Her LinkedIn profile also reveals a past career in NYC fashion. Berger & Stevens, where Amber once worked, is a fashion and accessories showroom in Manhattan.

3. There Are Photos of Her Sitting Next to Robin at the ESPYs

Robin reportedly did not keep this relationship a secret from her coworkers and friends, and even brought Laign to major events. At the ESPYs in July, in fact, the blond was sitting two seats away from Roberts in the audience. She was there in support of Roberts, who received the Arthur Ashe Courage award. Sitting in the middle of the couple was Sally-Ann, Roberts’ older sister who gave her own bone marrow to save her sister’s life.

Robin expressed her sentiment for her girlfriend on Facebook, saying, “I am grateful for my entire family, my long time girlfriend, Amber, and friends as we prepare to celebrate a glorious new year together.”

CNN’s senior media correspondent Brian Stelter, who wrote Top of the Morning about morning television, remarked on Twitter that Roberts failed to mention her sexuality publicly in the past.

…That message is the first time that @RobinRoberts has spoken publicly about her sexual orientation.

5. ABC News Said, ‘We Love Robin and Amber, Who We Have All Known for a Long Time’

ABC News’ Jeffrey W. Schneider released that statement on the day Robin did. He also included this message: “We were so touched by Robin’s Facebook message today and so thankful for all the loving support she has in her life.” Although on the Monday-morning GMA broadcast following Roberts’ big Sunday reveal, nothing was mentioned.

Michelle Obama also issued a statement of support for the couple.

.@RobinRoberts, I am so happy for you and Amber! You continue to make us all proud. -mo 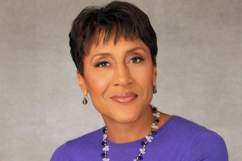 Robin Roberts Comes Out of the Closet as Gay on Facebook