Robin Thicke and members of Earth, Wind and Fire got really old school with their performance of “Blurred Lines.” Accompanied by T.I. as usual, Thicke had a fantastic performance tonight at the Grammy Nominations Concert. Wearing a tux with an untied bow tie, Thicke romanced the crowd by taking things down into the audience.

One thing that was kind of amusing, but somewhat uncomfortable was a brunette-haired woman trying to dance sexy and make eyes at Robin Thicke in the front row.

On a side note, what viewers didn’t see was Thicke’s performance of his song “Give It 2 You.” 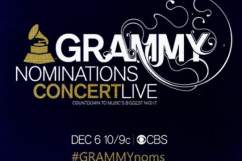 How to Watch the Grammy Nominations Concert 2013 Livestream