In Times Square this morning, where crowds already gathered for the ball drop, host and co host of Dick Clark’s New Year’s Rockin’ Eve sat down for an interview on Good Morning America.

Jenny McCarthy started by acknowledging that it was Seacrest who invited her to participate four years ago. “He is one of the greatest people I’ve ever worked with. He’s been a class act,” she gushed.

“She’s my bad influence,” Ryan said. “I love having her around.”

Yesterday morning, the happy couple took this selfie in preparation for the big event.

I've always got time to snap a selfie with @RyanSeacrest. #RockinEve pic.twitter.com/RXY6sjBdzd

Speaking about bad influences, McCarthy, who famously kissed a police officer as 2012 rang in, dished on her lip-locking history.

“I usually have no one to kiss. I find randoms,” McCarthy confessed.

‘I will be kissing someone this year.”

When Seacrest pushed her to explain her definition of random, she said, “There is someone that has taken control of my heart.”

It is no secret that McCarthy is dating former New Kids on the Block member Donnie Wahlberg. In November, she told US Weekly that she was not opposed to proposing to him one day. “I think he would be an amazing husband! So, if he does [propose] yea, I would sure say yes. I wouldn’t be surprised if I was the one proposing!”

When asked if he will be there tonight, she teased, “We’ll have to see if he’s on the block.”

The pair discussed the lineup of performances for the evening, and Seacrest said this year boasts the most performers in the history of the show.

One of the most buzzed-about performances will be Wrecking Ball singer Miley Cyrus doing her thing around the new year’s ball this time.

Seacrest gave viewers a sneak peak into the twerker’s fashion choice for the evening. “I’ve seen her outfit, and there’s a cape involved.”

Cyrus tweeted this preview earlier this month to get New York excited for her highly-anticipated, possibly twerk-friendly performance.

NY get ready for NYpic.twitter.com/S4NLluB29N

Seacrest instagrammed this video yesterday of him dancing to Pharrell, with the ball as his backdrop.


Joining in on the pre social media party, McCarthy instagrammed this shot. 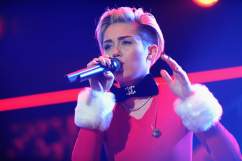