We were all crushed when Brian, the dog from Family Guy, was hit by a car and killed on the show. Apparently, it was all part of an evil plan, hatched by creator Seth MacFarlane in order to teach viewers a holiday lesson.

He's back!!! The moment Brian Griffin was saved #FamilyGuy pic.twitter.com/DEs4Ur4RSA

Last night, Brian returned as the new family dog Vinny helped little Stewie go back in time to save Brian from being hit by the car.

Check out the hilarious tweets that MacFarlane posted after the episode aired, showing us all the method to his madness.

I mean, you didn't really think we'd kill off Brian, did you? Jesus, we'd have to be fucking high.

And thus endeth our warm, fuzzy holiday lesson: Never take those you love for granted, for they can be gone in a flash.

Oh and hey… thanks for caring so much about the canine Griffin. He is overcome with gratitude. 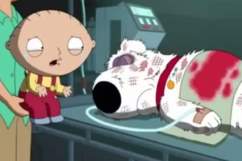