Transformers’ star Shia LaBeouf has been accused of plagiarism just hours after he unleashed his short-movie Howard Cantour on YouTube, reports The Hollywood Reporter.

LaBeouf has admitted to the similarities on Twitter, posting a series of tweets he wrote:

Copying isn't particularly creative work. Being inspired by someone else's idea to produce something new and different IS creative work.

Buzzfeed notes that the first part of LaBeouf’s apology bares a striking similarity to this Yahoo Answer that was written four years ago.

In my excitement and naiveté as an amateur filmmaker, I got lost in the creative process and neglected to follow proper accreditation

Im embarrassed that I failed to credit @danielclowes for his original graphic novella Justin M. Damiano, which served as my inspiration

I was truly moved by his piece of work & I knew that it would make a poignant & relevant short. I apologize to all who assumed I wrote it.

2. The Movie Was Debuted at Cannes

LaBeouf just debuted the movie, Howard Cantour which stars Jim Gaffigan as malcontent movie critic, on December 16 by posting it on Vimeo. It was first shown at at the Cannes Film Festival in May 2013.

3. A Representative of Clowes Has Called it a ‘Complete Rip-Off’

Jacqueline Cohen, director of publicity and promotions for Fantagraphics Books, Inc, spoke to The Hollywood Reporter, calling LaBeouf’s effort a “complete rip-off” and that “[Clowes] had no knowledge that he had been plagiarized until today when the film was posted on Vimeo.”

4. The Trailer For the Movie Now Credits Clowes

After allegations spread online, the website promoting the movie, HowardCantour.com, was taken down. It later reappeared featuring a trailer for the movie that clearly states: “from the Justin M. Damiano comic.”

This is the second plagiarism claim against LaBeouf this year. Back in February, he was accused of stealing lines from an Esquire article in an email the actor sent to Alec Baldwin. The pair were in an argument after LaBeouf dropped out of what would have been his Broadway debut in Orphans. 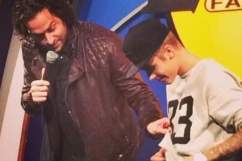 WATCH: Justin Bieber Gets Roasted by Chris Delia on the Laugh Factory Stage