Tonight NBC premiered “The Sound of Music Live!” starring Carrie Underwood, Stephen Moyer, and some of Broadway’s biggest stars like Audra McDonald, Laura Benanti, and Christian Borle. NBC is billing it as the first live production of a musical made for television in 50 years.

And incase you missed the show, or want to see it again, here are the videos of every song for you to watch at your leisure: 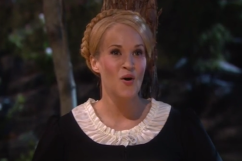 Re-Live ‘The Sound of Music Live!’: Watch All the Songs Here

Here are the best or funniest moments from this classic musical revisited:

In theatre, set designers have the luxury of distance. Audience members can only see so well, so a lack of fine detail often goes unnoticed. On television you don’t have that luxury. Maria’s first song in the mountain pass, is quaint to the point of hilarity.

A lot of respect goes out to those set designers for the elaborate wooded area and mountain backdrop. It’s too bad that this was the first elaborate set of the show because others, like the Van Trapp veranda were quite impressive. Can you believe they had a running fountain and everything?

You have to give credit to Carrie Underwood but the line was just too awkward too good to ignore. “Yes Reverend…I mean Captain.” Classic live television. The pause was way too awkward. It was bound to happen to someone, especially with no audience to break up the silence with laughter, but you just have to hate that it happened to her. So many people have been hating on her this week that you were almost rooting for her to prove them all wrong.

Even five time Tony Award winner Audra McDonald paused a little bit with an awkward pause just before “Climb Every Mountain.” It was painful.

Let’s not forget the awful and painful line flubs that occurred between Captain Van Trapp and the lead Nazi toward the middle of act two. Oof.

PLEASE watch the show tonight with an open heart and mind. We are performing for you with love. We adore our leading lady. Suck it haters.

Being nostalgic in the world of theatre is impractical. Directors need to have space to make the show their own and take certain liberties. However, there also some things you can’t mess with. One of those things is the gazebo in “16 Going on 17.” It’s a classic moment from the movie as well as many subsequent productions.

Don’t get me wrong, the song was actually good. Both the actors who played Rolf and Liesl are in college for theatre and I would venture to say that they have long careers ahead of them. However, something about being playful by dancing circles around trees does not have the same charm that an Austrian gazebo has.

4. Christian Borle and Laura Benanti Save the Day

In a show that relies on the names of two big-time celebrities to get people to tune in, it’s important to stack the supporting cast with talent. In this case, the supporting roles of Max Detweiler and Elsa Schrader, played by Broadway icons Christian Borle and Laura Benanti, save the day.

The first hour was enjoyable, but pretty awkward. Borle and Benanti breath some fresh life, energy, and theatre acting skill into this show.

5. The Kids are Great

“So Long Farewell” was great. Simple as that. Children actors are always wildcards when it comes to live theatre, but these kids nailed it. They’re hopeful little smiles add a touch of personality that this show desperately needs, especially since the relationship between Maria and the Captain feels painfully false and the Nazi sub-plot is lost somewhere.

This is an argument in defense of screen/stage chemistry. There is such a thing and it generally comes from actors being able to convey a shared sense of history. I can tell Stephen Moyer is trying, and for that matter, so is Carrie Underwood, but something is missing. Excruciatingly missing.

Underwood seems convincing enough when she’s singing, but conveying emotion while speaking is not her strong suit. Each time she and the Captain speak, it seems like they are strangers on line in a bank. She always seems somewhat surprised that the Captain exists.

Many people, include almost 50 percent of all people on Twitter, forgot that this show is about the Nazi incorporation of Austrian and Captain Van Trapp’s defiance of them in the face of danger. However, that hardly comes across in this show. Hints of Nazism and the coming war get mentioned every 25 minutes or so, but even then, you don’t see the first Swastika into well into act two.

The Nazis in this show also don’t seem quite as deserving of our fear and contempt as they should which decreases from the overall drama of the show.

8. Ok, There are some Hilarious Costumes

It’s hard not to get caught up in the human element of this live performance, but I think we should take a moment to acknowledge the costuming. One of the final scenes, the big concert, really showcases how the costumes designers have attempted to take traditional Austrian/Bavarian garb and make it a little more fun for American musical theatre audiences.

For those familiar with the movie, you were probably surprised when Nazi/boyfriend Rolf decides to save the Van Trapp family and lie to his Lieutenant. In the movie, as most of you should remember, Rolf blows his little Nazi whistle and the family has to run for it. You all should be relieved that they were able to get away at their own pace and we didn’t have to see children run across a fake mountain pass.

The three Twitter trends that have been active during the show were the obvious #TheSoundofMusicLive, and then the less obvious Laura Benanti, and then the hilarious, Julie Andrews.

The amount of Twitter hatred being heaped upon this show has been simultaneously hilarious and terribly terribly sad.

Re-Live ‘The Sound of Music Live!’: Watch All the Songs Here