Former child star Tami Erin is caught up in some legal drama. Check out the 5 Fast Facts on Erin’s new rap sheet.

1. Pippi Longstocking Is Charged With a Hit-and-Run

The former “freckled-face, red-haired girl you wanna know” has been charged with a felony hit-and-run. TMZ reports:

Erin was driving in L.A. when she allegedly hit 3 cars and took off. Law enforcement sources say at least one person was taken to the hospital … And get this … Erin didn’t hit them all at once — we’re told she hit the first car then drove off … then hit another car and drove off … and then she hit the last.

We hope Pippi can make it out of this bind, but it’s not looking too good.

2. The Star Was Also Smacked With a DUI

Apparently, alcohol was a definite factor in the accident. TMZ writes that when cops found her they did a field sobriety test, which resulted in an arrest for both the felony hit-and-run and a DUI. One source told TMZ she was “totally out of control … just out of it.”

Back in April 2013, Erin was arrested for allegedly assaulting her roommate. TMZ reported:

According to Walnut Creek PD in northern California, Erin was placed under citizen’s arrest by a neighbor who heard Erin and her male roommate arguing. Police say at some point, the roommate called out for help and that’s when the neighbor came rushing to the scene and placed Erin under arrest until police arrived.

In a statement Erin gave to E! News, she insists she was defending herself, stating:

I’m in the San Francisco Bay area to support my father who had a stroke,” she said. “I thought I was in a safe environment and my privacy was illegally violated. I caught this person filming me without my knowledge in my private environment and I was defending myself. He’s 6′ and I’m a 5’5” small girl. How much has he been filming me without my knowledge? The truth will come out.

5. Erin Is Currently Recognized for Her Sex Tape Release 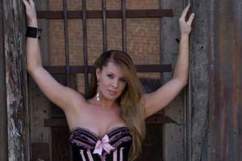 Originally, Erin came out to the media that she was trying to stop the release of a sex tape she shot with an ex. However, the tables turned and she ended up promoting it herself.