UPDATE – Two big Spider-Man Movie announcements have been made: a film based on Venom will be written and directed by Alex Kurtzman. The other writers for the film include Roberto Orci and Ed Solomon. Drew Goddard will write the script for a film focused on the Sinister Six. Hit up the following LINK for more details.

The Amazing Spider-Man 2 trailer finally got revealed to the viewing public who weren’t on hand to see it a this year’s San Diego Comic-Con expo. Any hardcore comic book heads who watched the trailer with a keen eye probably spotted a ton of references to a ton of Spider-Man characters and events.

One peek at the gif above should provide a clue on some possible Spider-Man villains who might be featured is future entries in the movie series. We know Electro, Rhino and the Green Goblin will give Spider-Man the fight of his life in this film. But judging from the pic above, it looks like two more Spidey antagonists may rear their ugly heads – The Vulture (wings on the left) and Doctor Octopus (tentacles on the right).

Does this mean the Sinister Six will eventually make an appearance on the big screen? Maybe! It’s interesting to note that the original Sinister Six lineup included Doctor Octopus, Vulture, Electro, Kraven the Hunter, Mysterio and Sandman.

Share this look into all the new Amazing Spider-Man 2 trailer news!

BusinessInsider.com made sure to announce that the chances of this happening are high due to the rumors regarding the future of the Marvel Comics movie universe:

There’s been speculation that after the next two films in the franchise are made — a third for 2016 and a fourth in 2018 — that Marvel / Disney may eye up the character to join the Avengers gang. It makes sense — pairing Spider-Man (a known Avenger ally / member) up with more heroes rather than forcing him fight crime alone because different studios own the rights to other characters that interact with Peter Parker. 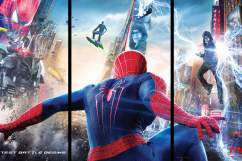 Along with the scene depicting the oncoming gathering of the Sinister Six, a couple of other Easter Eggs and cool scenes popped up during the trailer. If you stayed in your seat after the credits of the first film, you probably spotted the mysterious dude with the hat speaking with The Lizard. He shows up in this trailer and gets us even more curious about who he really is:

Only the most ardent Spider-Man fans will know what this following pic alludes to. Emma Stone (Gwen Stacy) can be seen sporting a familiar set of clothing. In the comics, Gwen Stacy wore that same exact outfit when she died at the hands of the Green Goblin. Could this mean that we’re going to see someone one perish in The Amazing Spider-Man 2? 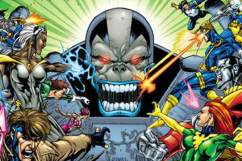