6. The New VS Commercial Made Its Debut

The insanely hot commercial that they angels filmed in Paris finally made its debut. It aired at the halfway point of the night’s runway show during one of the breaks and it was definitely worth the wait.

That's so funny, Victoria's Secret! I also walk around the streets of Paris in nothing but a bra and panties and some wings!

7. Birds of Paradise Was Another Theme of the Night

Boobs, butts, and feathers flooded the runway for the Birds of Paradise section of the show. Fall Out Boy performed once again in a fierce set.

There’s always a piece of lingerie that is outrageous to say the least when it comes to the Victoria’s Secret fashion show. This year, model Candice Swanepoel walked the runway wearing a 10 million dollar bra. Check it out.

In a stunning metallic mini dress, Swift walked with the models on the catwalk singing her song “I Knew You Were Trouble” for the Snow Angels part of the evening. Check out these pics … Swift could easily be mistaken for one of the VS angels, right? A fabulous way to end the show …

At the beginning of Swift’s performance, Adam Levine was visibly excited, exclaiming “YES!” in his seat as Prinsloo walked the runway once again. He then blew multiple kisses to her, making women’s hearts melt across the country.

#VSFashionShow fact: this is @NeonJungleMusic’s FIRST performance in the US! pic.twitter.com/JVVfnyaJ8H

Girl group Neon Jungle gave a fun performance with another song about trouble. The models had fun on the runway covered in smiley faces and crazy outfits to go with the performers’ song. 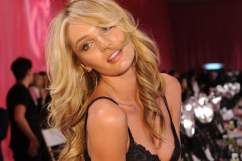