A video of Phil Robertson, the now-suspended star of A&E’s popular show Duck Dynasty, has been discovered on YouTube, containing even more controversial anti-gay comments than in his GQ interview.

The video, which you can watch above, is just one part of a long sermon given by the now-67-year-old Robertson at Berean Bible Church on February 5 and 6, 2010.

Meanwhile, Robertson has been suspended from his television show by A&E for his statements in GQ. According to the Daily Mail, the rest of his family says they will not continue filming without their patriarch, who filmed just two episodes of Season 5 before the suspension was put in place. 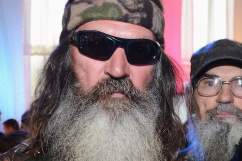