The 24-year-old boyfriend of 17-year-old superstar singer Lorde is the victim of a cyberbullying tirade.

Word got out that Lorde called One Direction and Justin Bieber ugly, and what has resulted is an all-out verbal battle on Twitter. Fans of the boy band and Biebs are attacking Lowe based on this Asian ethnicity and looks.

On March 18, he finally broke his silence on all the bullying.

On his website, he started by talking about the negative aspects:

I’ve experienced being a target of the tabloids, finding moments I thought I was in safe hands splattered all over the internet, being pushed and shoved, or watching others get pushed and shoved by paparazzi just to get what they think they’re entitled to.

But ended on this positive note:

There is a bright, shining silver lining to this thing I’ve been exposed to. I’ve had the privilege to sit on an aircraft for 12 hours, cramped, exhausted but happy (like Louis CK once said, “YOU’RE FLYING. YOU’RE SITTING IN A CHAIR IN THE SKY!”). I’ve been able to tell tales of the many amazing people I’ve met along the way – from fellow photographers, to artists I’ve always admired and never thought I’d get to meet, let alone have a simple thing like coffee with…

Lorde also opened up to Rolling Stone about the controversy, saying, the bullies are “the type of people who use the word ‘f—-t as an insult.”
She also admitted that the hateful insults did affect her.

[I’m] not completely impervious to insult. I’m a human being.

The singer brought James to the 2014 Grammys. They were spotted hanging out in LA just a few hours before she sang at Delta Air Lines’ pre-Grammy Awards party at Soho House in West Hollywood.

When Lorde won for Song of the Year and Best Pop Solo Performance, Lowe was nowhere to be seen. From the looks of this picture he posted on Instagram, he was most likely sitting very high up.


After the show ended, Lowe was still basking in Lorde’s glory.

Besides photos the couple posts together, little is known about Lowe. Here’s what we do know.

1. He is a Photographer

According to his professional website, Lowe is based in Auckland, New Zealand, where Lorde is from.
Here is his website, where he apparently posts his photo shoots with Lorde.


On his site, one of the pictures of Lorde’s concert has this caption:
“Ella/Lorde played her first public show on 9th of May at Galatos- It’s taken me weeks to get a few rolls of film developed, only to find most of them are a mess (my mistake for thinking I could shoot across both film and digital in a small window of opportunity). A biased opinion, but i’ll say it anyway- she was amazing, always taken back everytime I hear her sing. These photos do no justice.”
His Instagram account is filled with pictures of Lorde and her concerts. According to starcasm, Lowe definitely worked for Lord.

He used his site to proudly post about his famous girlfriend’s accomplishments:

Since originally sitting down to write this post, Ella has become a two time grammy winner. She has taken home a Brit too. Currently she is on the opposite side of the world on tour. As much as I miss her, I couldn’t be prouder of what she has achieved so far.

Niall Horan and Harry Styles of One Direction. (Getty)

According to the Daily News, Lorde has never been quoted as saying anything negative about the male singers. In fact, she was recently at one of the British boy band’s concerts. But rumor was enough to send 1D fans into a frenzy. The worst attacks focused on Lowe’s race. Jezebel reports that there is no solid evidence that Lorde ever said anything about One Direction or Bieber’s looks. However, she did once make a comment about Bieber’s career. This summer, in her first interview with MTV News, she insulted him by saying, “I feel like the influences that are there in the industry for people my age, like Justin Bieber or whatever, are just maybe not a very real depiction of what it’s like to be a young person.”

How can Lorde call Justin ugly when her own boyfriend looks like mr chow pic.twitter.com/6aAB94K55a

Although many are responding in a negative way, there are those who think it’s a great sign. Asian brothers David and Andrew Fung used their Youtube channel to celebrate that a celebrity has finally chosen to date a “nerdy Asian guy.” “Female celebrities never date Asian guys. Even Asian girl celebrities don’t date Asian guys!” they excitedly yell into the camera. Watch the video here:

3. Tyler the Creator Added to the Controversy by Instagramming a Photo of the Couple

His caption, “Hhahahahahah” got 74,720 likes. Lorde responded on Twitter with, “was this supposed to make me feel something?”

4. He’s Close to His Sister

Lowe has a sister, Katherine. On his website, he mentions a collaboration the two did together.


Katherine has a Twitter handle, @thedownlowe, where she posts Vine videos of her brother. Here is one where she has James reads the questions he gets on Tumblr. He starts with, “Are you Ella’s boyfriend?” For those who don’t know, Ella is Lorde’s legal name.


Here’s another of Katherine’s Vine videos, where James recites, “What’s it like dating a girl like Ella?”


5. Lorde Has a History of Poking Fun at Musicians

In Interview magazine, she said, “Around the middle of last year I started listening to a lot of rap, like Nicki Minaj and Drake, as well as pop singers like Lana Del Rey. They all sing about such opulence, stuff that just didn’t relate to me—or anyone that I knew. I began thinking, “How are we listening to this? It’s completely irrelevant.”

She also publicly stated that David Guetta was “gross,” after she heard he wanted to collaborate with her. In an interview with Q magazine she dished about her distaste for pop stars. “There are a lot of shock tactics these days: people trying to outdo each other, which will probably culminate in two people f***ing on stage at the Grammys.” 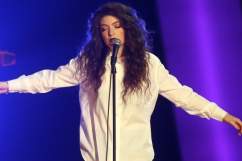