The 43-year-old stepbrother of Leonardo DiCaprio has been arrested and his daughter is missing. Here’s all you need to know about the estranged brother of the A-list actor. Radar was told that Farrar and DiCaprio “had zero contact in recent years and do not get along. It’s a very bitter family feud.”

1. He Was Arrested in Texas on Drug Charges

Radar found out that he was detained by police in Texas on two Class A Misdemeanors for possession of drugs and theft on Friday. If he’s convicted, he faces lengthy jail time. Over the last three years, Farrar has been charged with harassment, possession of a controlled substance, driving without a license and domestic violence.
Cops told the Daily News that Farrar got caught when he tried to visit Moore, 38, after her arrest.

According to the Daily News, when Farrar was arrested in 2000, charged with trying to kill his girlfriend, his stepmother, Peggy, DiCaprio’s mother, had this to say:

Adam is one of the most nonviolent people I know. All the charges will be proved false. I can promise you that.

2. His Girlfriend Was Arrested on January 20th

3. He Has a Missing 6-Year-Old Daughter, Normandie

They grew up together in LA when DiCaprio’s mother, Peggy, married Farrar’s father, George DiCaprio. Leo was just 1 year old at the time.
There was a time when the brothers were close. In fact, they were often spotted at Los Angeles Lakers basketball games together, and Hollywood parties. According to imdb, it was his stepbrother’s success, that made Leonardo pursue acting. The site also claims that Farrar helped launch leonardodicaprio.com, his stepbrother’s official website.

His character was Willie Griffin. He also appeared in a controversial indie movie Pups, where he played a paraplegic. 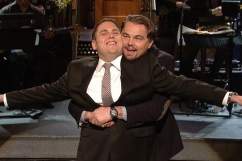